Hey all! Wanted to share with you that I've posted some thoughts on a book I got to read (finally!) on a blog called


The Thousander Club
Sounds epic right? That's because it is. The club is meant for all those who want to achieve the goal of reading 1,000 books in their lifetime. I know plenty of you who I'm sure are well on your way, so go over and follow/join up! They're also always looking for more people to contribute thoughts on books they've read, so if you're interested or know anyone else that would be, spread the news and I'd be happy to get you in touch with the person in charge.
And, may I say, after all my school reading this summer, I think I earned getting to read one novel!
No comments:

My trip to Hogsmeade

I'm too old to be geeking out like this. To say I geeked out may even be a bit of an understatement.

My friend Yvonne met me and we went into the Universal Studios Island of Adventures park. Weaving in and out of the other sections of the park, I was looking for one thing: Harry Potter World.

We saw some snakes... 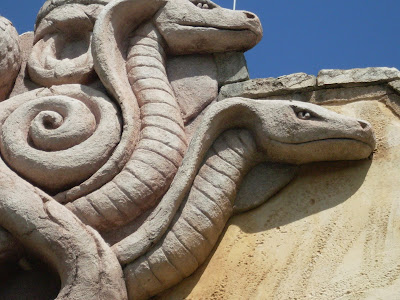 But no Slytherins.
This guy looked like he was about to have a basilisk come out of his mouth... 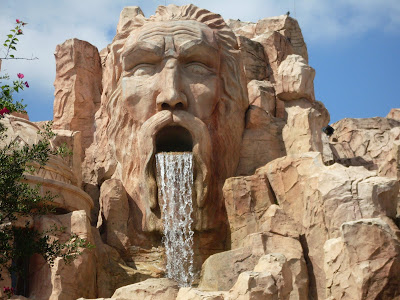 But it was a false alarm.
I even thought at one point I saw Dumbledore... 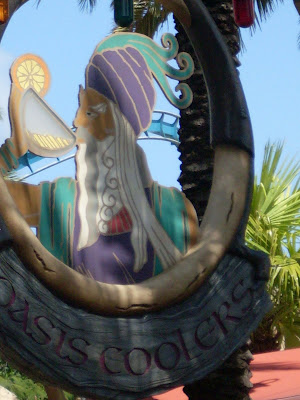 But no such luck.
We kept following the signs... 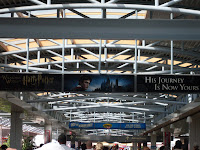 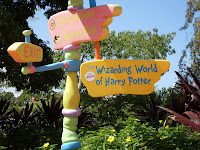 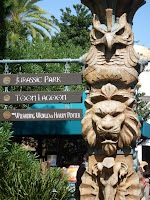 And just when I was about to find the Promised Land, Yvonne blindfolded me. 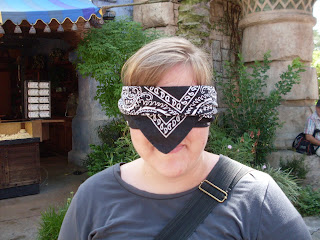 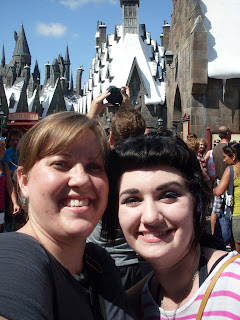 I jumped up and down, happy as a clam and made my way through the amazingness that was Hogsmeade. There were Beauxbaton girls, and Durmstrang boys... Honeydukes (where I got myself a chocolate frog) and the Owlry were packed like any other Hogsmeade weekend, and I nearly died when Moaning Myrtle started yelling at me when I went into the girls' bathroom! They really thought of everything! 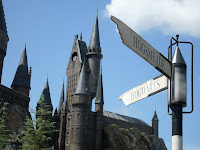 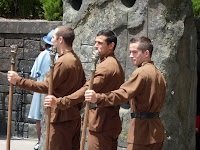 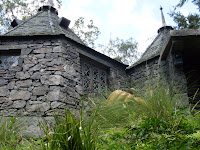 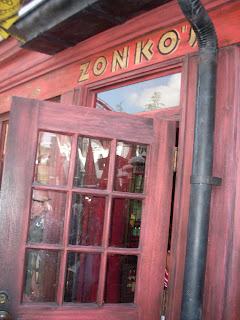 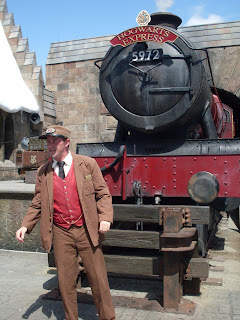 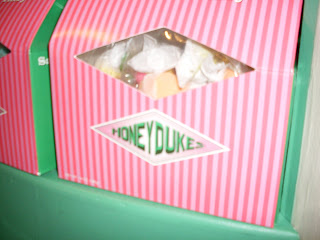 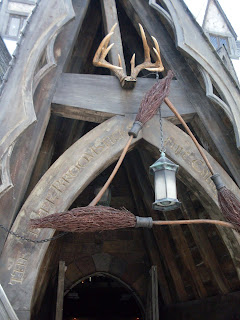 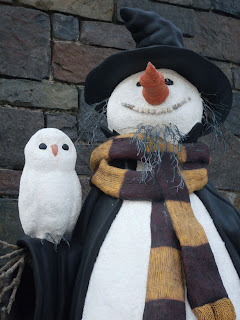 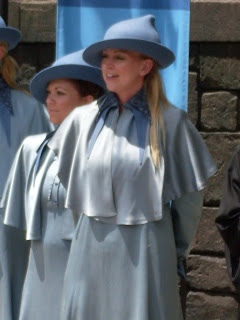 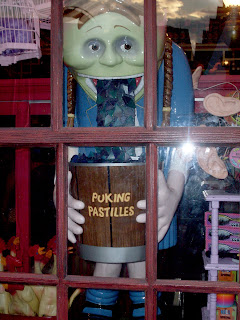 Oh... and if you ever go... make sure to try the Butterbeer. Cheers until later! 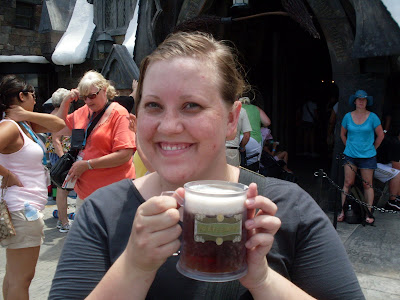 Exercise is bad for you.

Fact: no matter what nutrition guru you talk to, they will find something wrong with the way you’re trying to be healthy. Being certifiably chubby, I attract this attention the way a large, fatty steak sitting on the kitchen counter for three days attracts flies.
“Have you been coming to the gym often?” a little size two asks—ponytail bouncing as she jogs in place. She doesn’t even have to try and stay that small. I know it, she knows it, and every Tom, Dick, and Harry using the mirror to "discreetly" check out her rear knows it. Still, her feet move as fast as her metabolism and my energy drains just watching her.
“Yes, I’ve been very good,” I inform her. “I’ve been running for 20 minutes every day!”
“What?” she stops, eyes widening. “No, no, no, you shouldn’t do that. You need to vary your heart rate.”
Some yoga-yahoo hears us and half slithers, half dances to where we stand. “Too much strain on your muscles will make your body retain fat. It’s better to do flexibility training.” Limbs extend from places that couldn’t possibly exist in this dimension as I tilt my head over to try and politely make eye contact. Her head is twisting around her leg and I start to wonder if she’s had bones removed to make this possible.
“What do they call that move?” I ask her.
“The dodo bird.” At least I think I hear “dodo bird”. Her voice is muffled with her mouth pressed up against her outer thigh.
“It’s all about strength,” Bob the Bodybuilder interjects as he picks up 200 lbs dumbbells from behind me, alternating bicep curls on the right and left. “You tear the muscle, then they grow back even bigger. That’s what really burns your fat.”
I cringe at the thought of tears in any part of my body. Aren’t tears supposed to be bad? I’m certain I’ve heard terms like “tearing a ligament” or “tearing muscles” thrown around on Grey’s Anatomy and it never sounded like a good situation to me.
“I’ll stick to the running,” I say.
As if I’m not even there, they continue to go discuss the latest studies they read from one health magazine or another. It isn’t until they all manage to get on the topic of the latest fad diet by Dr. McSkinny that they find some common ground.
“You’re not following that nonsense are you?” Master Yoga asks.
“Nope! But I’ve stopped eating carbs and added more fruits and vegetables to my diet,” I tell the gym cult.
“What kind of vegetables?”
Although I can tell by their faces this isn’t as simple a question as it seems, I plow ahead. “You know… the basics: green beans, baby spinach, carrots, corn.”
They nearly faint in unison. “Corn? Do you know how starchy that is? It’s terrible for you!” It was a good thing I didn’t mention the potatoes.
Someone else pipes in. “It’s the green beans that you’ve got to stop eating. Do you know what’s in that crap?”
No. I absolutely don’t know what’s in that crap, but I’m careful to circle my head between a nod and a shaking in hopes they’ll let it drop. They don’t. I’m told I shouldn’t eat grapes for breakfast, because they’ll cause bloating, and avocadoes are out of the question.
A war ensues as they go back and forth:
Protein shakes!
Carb load for running!
Green drinks!
Nuts and berries!
Vegetarian!
No you need meat!
Cheese!
Avoid milk products!
It’s official. Food is bad for you too. Avoid it at all costs.
They’re throwing lists of diet suggestions while putting down the others’ faster than I can recognize what foods they’re talking about. I start to slink back towards the exit as Ponytail lunges towards Bob while Yoga tries to untie herself to get in on the brawl.
“Well I’m just going to go home and get some sleep,” I say in farewell.
All heads turn towards me. “Oh, make sure you get plenty of that,” Bob says. The others nod. The one thing they can all agree on… lots of sleep.
So here’s my conclusion: forego eating and exercise to find a comfortable bed.
Because, after all, exercise is bad for you.
4 comments:

You should know that I will be your favorite aunt. There are two giant teddy bears waiting, lots of board books, BYU Cougar onesies, and that's just the beginning!  I plan on having so much fun spoiling you!

Auntie Rie just has one little favor to ask:

Can you come during Fall Break?
I know it will be a while before this makes sense to you, but Auntie Rie is taking a whole lot of credits this semester and could really use your help making it easy to drive to Vegas to see you while not missing any school assignments. I was looking through my schedule and between 20th Century art history, ASL literature, and advanced photography, the best time would definitely, definitely be fall break.

Get what, you ask? I could make lists to answer this question, but today I refer to one thing: shoes.

Ever since camping at the beginning of June, my foot was doing better. I was walking well and got the big OK from my physical therapist to stop coming to see him. (I miss the foot massage, don't miss the ice.) For a while everything was normal until I, once again, twisted it. I'm talented that way.

Mostly I'm still fine. Fine enough that I can wear whatever shoes I want... so long as I have my brace on.

The fact is, my brace only fits in a few of my shoes--despite the claim that I would be able to wear all my shoes with them-- and one of them is a pair of black wedges.

Only boys seem to think I shouldn't be wearing "heels". Classmates, supervisors at work, and guys in the ward have all made random comments about this. They don't get it. Why would they?

Girls, though, don't even seem to notice. I'm asked about why I'm wearing the brace and given a little nod of sympathy and a "nice shoes" to finish it off.  They know the truth of the matter: