Out of the mouths of babes

My cousin and his family are back from France for the summer and I finally got to see my three favorite little French speakers in the world!

After a big hug they stepped back and started with the compliments...

"Your makeup is beautiful!"...

To which I replied:

"Now I remember why I missed you all so much!"

At risk of writing things that don't make sense (I told someone earlier that I "took a nap in my parking lot"), I'm posting to share a couple photos from yesterday. 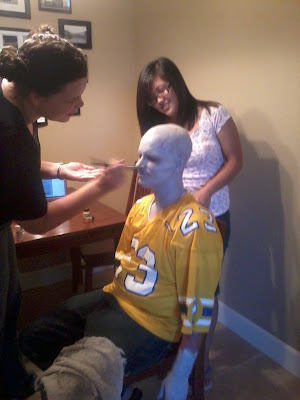 When I got there, makeup was being done on Travis as Voldy. He kind of looked Blue Man Groupish, but once it was more grey he looked awesome. Rumor has it that he even won a wand for such awesomeness. (And to think he originally was going to take off the costume before seeing the movie!) 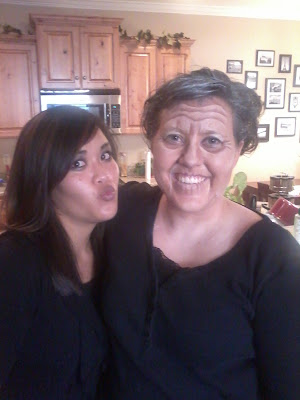 Rachel-the-seamstress proved that she was Rachel-the-makeup artist. Melanie had decided she wanted me to be Bathilda Bagshot (yes, technically not a Deatheater, but I think the idea came from the fact that I was bringing snakes). I kept forgetting I even had the makeup on until someone would comment on how great it looked.
My friend Chessie came with me to the photo shoot as well. She kept on about how she wouldn't dress up, that it wasn't her thing, that blah blah blah blah blah. Excuses, excuses. One mention of a poofy skirt that Melanie had and she transformed into Cho Chang gone bad faster than you could say "Avada Kadavra". 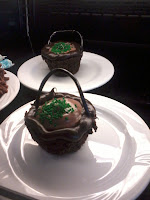 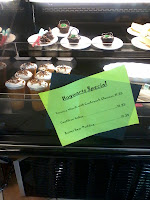 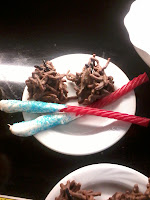 These were desserts being served at the student food court on UVU campus. There were Butterbeer pudding cups, Cockroach clusters with licorice wands (you could tell thy were cockroaches because of antanae made from black licorice). I love Harry Potter spirit!

After the movie--which I loved!-- I felt like an entire chapter of my life has come to a close. Melanie kept the fun going. Dressed as Bellatrix, she approached a woman dressed as Molly and they did their own rendition of the death of Bellatrix to top off an already theatrical night.


NOTE: these are unedited pictures from a cell phone. Judgers don't judge. You know who you are.
2 comments:

Ah, Harry Potter! I remember when I first picked up book one, which lay feathered out with use from Matthew, who had already caught the bug. I finished it one morning in first hour my senior year of high school and I was itching for the next... but couldn't wait to get home for it... so I started book one again.

My family calls me "obsessed". I call myself "literate". And perhaps even "with it".

So with it, in fact, that I'm with the cool people. You know the ones. The people who dress up, stand in line for hours, go to midnight releases; the works. When HBP (book six, for the Harry Potter uneducated) came out, I mimicked the green dress Rita Skeeter wears in the fourth movie, making a purse and all. The kiddo who came with me dressed as Fred AND George. I made a sweater with a "F" on the front and a "G" on the back, and he spent the whole night at the release party switching it from one side to the other. (I must find my picture of the two of us!)

Needless to say, Harry Potter has brought some good times. And last night, there were just a few more.

My friend Melanie from school is holding a Deatheater photo shoot tonight before the movie we're going to. She's coordinated all sorts and variety to come dress up and embrace their inner nerd. To help with this, I volunteered with the sewing on some robes for He-Who-Must-Not-Be-Named!

And cast in the role? Our dear professor Travis! If the fact that we're going to these lengths isn't quite enough, he came over for a fitting. The most entertaining fitting of my life, actually. As it was said last night "Voldemort wouldn't have a one-size-fit-all robe". We started pulling and prodding and hold-your-arms-up-demanding.


After realizing it was pointless to pin back the gads of fabric on the sleeves, I quite simply got out scissors and eyeballed it. It would have been easier if he didn't keep pulling his arm back in fear.

"You gave me an A this summer, I have no reason to cut you," I told him.

"And there's more grades to come," he threatened as Melanie extracted some personal revenge by taking photographs.

Luckily Melanie's friend Rachel knew better than me how to do alterations (it's one thing I've never had much practice at). Soon we had everything pinned up and ready and Travis went off to make his elder wand as we had some crazy times, using Melanie as our mannequin. Travis doesn't know this yet, but we're going to have a "who wore it best contest" tonight at the photo shoot.

Today will be made interesting as we start on makeup and bring my friend Gus the Snake on set. More pictures to come! And may you enjoy Harry Potter Day as much as I will!!!
4 comments: